A description of how the plateau indians lived

The topography includes plateaus, basins, and ranges. The climate on the Colorado Plateau is temperate, while it is semitropical in most of the basin… Traditional culture patterns The people of the Cochise culture were among the earliest residents of the Southwest. A desert-adapted hunting and gathering culture whose diet emphasized plant foods and small game, this group lived in the region as early as c. Farming became important for subsequent residents including the Ancestral Pueblo Anasazi; c. 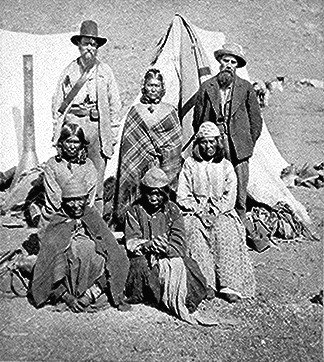 Therefore, they needed shelters that were easy to take down and set up. They lived in one of three shelters, depending on the season: Example of a pit house Side entrance pit house Housing - the Pit House Pit houses were used mostly during the winter months, although some might have been used all year.

A pit house was a shelter built mostly below ground with an entrance and ladder at the top. The first step in constructing a pit house was to dig a metre deep pit into the ground using a wooden digging stick or an elk scapula shovel.

The walls and frame of the pit house were built with logs and sealed for insulation with dirt and grasses. The domed roof frame was also made out of wooden poles, and then covered with layers of timber, bark and earth.

The entrance into a pit house was usually via a ladder through a hole in the roof. However, some pit houses had entrances in the side of the roof.

Several families lived in each pit house. Pit house during construction Construction of pit house roof frame Plateau tipi Housing - the Tipi The summer shelter for the Plateau people was usually an above ground shelter such as a tipi or tule mat lodge.

Tule mat lodges were essentially large, oblong-shaped tipis, constructed using the same materials. They had a wooden frame, covered with mats of tule or other grass. Tule reeds were used in the construction of tipis and lodges, because they were strong, durable reeds that were readily available in the area.

They were made out of poles and tule brush mats, similar to the construction of a tipi. However, they were built to lean against a solid frame, and were intended to be very temporary.

Winter pit house village Seasonal Villages The people of the Plateau region moved around and lived in seasonal villages. During the warmer months, groups of related families migrated together in search of food.

They generally lived in small villages or village clusters near berry patches or good hunting and fishing grounds. In the summer, they usually lived above ground in either reed mat tipis or tule mat lodges. During the winter months, the Plateau people settled in larger, more permanent villages.

A winter village either consisted of one large community pit house, or several smaller pit houses. Sometimes the pit houses were connected with a tunnel.The Nez Perce (/ ˌ n ɛ z ˈ p ɜːr s /; autonym: Niimíipuu, meaning "the walking people" or "we, the people") are an Indigenous people of the Plateau who have lived on the Columbia River Plateau in the Pacific Northwest region of the United States for a long time.

The summer shelter for the Plateau people was usually an above ground shelter such as a tipi or tule mat lodge. Plateau tipis were similar to the tipis built by their neighbours - the Plains people. It was mostly the Ktunaxa people who built these tipis, as they lived the closest to the Plains people who greatly influenced their culture.

Climate of the area of the Plateau Indians. The Plateau Indians traditionally inhabited the high plateau region between the Rocky Mountains on the east and the Cascade Range and Canadian Coast Ranges on the west.

It includes parts of the present-day U.S. states of Montana, Idaho, Oregon, and Washington and the Canadian province of .

The tribe refers to themselves as Niimíipu (the people) however also use the name Nez Perce as does the U.S. government. The people are descendants of the ancient Cordilleran Culture.

These were ancient people who lived in Northwest America up until about BC. The Stl'atl'imx lived in the western portion of the Plateau region.